When it comes to high-end coolers, Yeti is the brand that’s right at the forefront. From launch boxes to hunting and fishing coolers, the brand was able to cover a huge range of consumer needs, thanks to its diverse range of products, exceptional build quality, and accessibility.

That doesn’t mean Yeti has taken over the coolers market, though!

Dewalt is another top-tier brand that plays a notable role in the cooler market. Even though the brand is more synonymous with power tools and toolboxes, it still produces high-quality coolers that can compete with Yeti’s coolers.

This begs the question, Dewalt Cooler vs Yeti: which brand to choose? Stick around to find out!

Comparing both coolers, Yeti seems to be the overall better cooler. On the other hand, Dewalt’s cooler performance comes very close to Yeti’s at a much more affordable price. There are even some extra accessories in Dewalt coolers, such as bottle openers and detachable handles, that aren’t present in Yeti’s cooler.

Which Cooler Is Cooler?

Here’s a side-by-side comparison between Dewalt and Yeti. We’ll highlight both the similarities and the differences between the two brands to make it easier for you to decide.

Here are the factors where Dewalt and Yeti coolers shake hands in similarity:

Ice retention is the most important aspect when it comes to purchasing a cooler. Luckily, both Dewalt and Yeti coolers deliver in that aspect.

We’ve tested the ice retention between the similarly-sized 65-quart Dewalt and the 60-quart Yeti, and both of them averaged about 100 hours of ice retention, which is quite impressive. 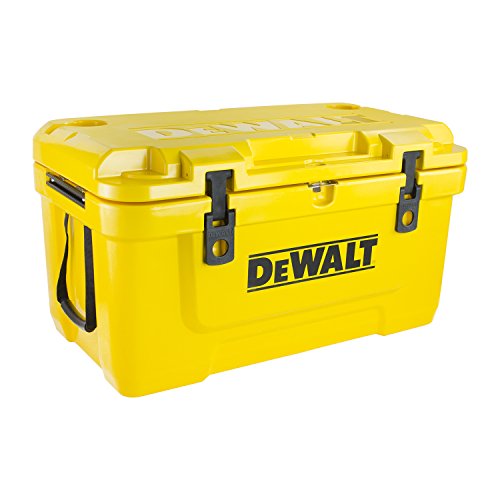 Another important aspect you should look for in a cooler is the sturdiness and build quality. There’s no point in ice retention if the container yields against minor impacts.

Fortunately, again, Dewalt and Yeti coolers are pioneers in construction quality. Both coolers are rotomolded.

Rotomolding (short for rotational molding) is the method of choice when it comes to shaping the plastic to line the container.

Rotomolding ensures the maximum possible durability and thus, it became an aspect to look for. Many people scratch some coolers from their list simply because they’re not rotomolded.

Now, here’s how Dewalt and Yeti coolers compete over customers:

Many features can be added as accessories to coolers. Since both companies offer numerous models, we’ll stick to the features that stand out the most. 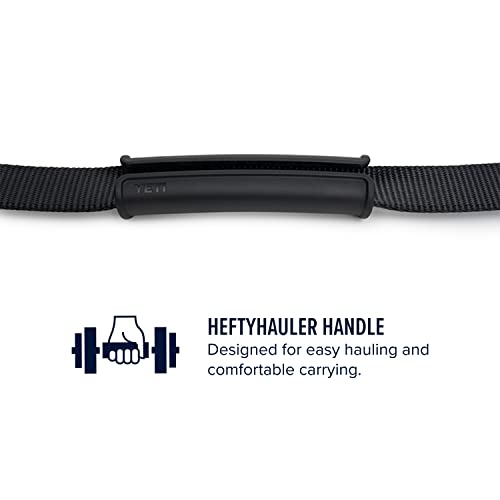 Instead, Yeti uses a military-grade polyester with a rubber grip that makes it easier to carry even if the hands get a little sweaty. That rubber grip is missing from the Dewalt coolers, which is a bit disappointing.

Larger coolers of both brands replace the overhead handles with side grip handles. Luckily, both coolers have the rubber grip this time.

Yeti goes the extra mile and advertises their side grip by the name “LIPGRIP Handles™.” Yeti says that they’re made of the highest quality materials and will last many years.

Regarding the handles aspect, we’ll give the point to Yeti since it comes with stronger and more comfortable handles.

An important feature of any cooler is having an ergonomic design to allow for easy carriage. Yeti took the mobility aspect a bit further and installed wheels on the Tundra Haul model.

Aside from that particular model, all other models of both brands seem to stick to the standard “carry to transport” procedure.

Mobility-wise, we’ll give both products a point as we think they’re fairly similar. 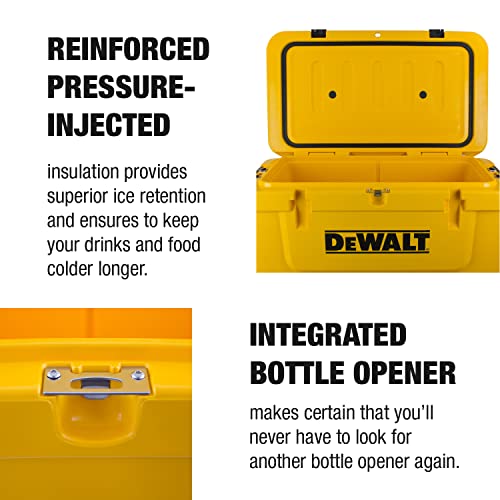 A cooler is a straightforward product that not many accessories can fit in. However, Dewalt managed to take a step ahead of Yeti in that aspect.

Accessories aren’t the prime aspect when it comes to buying a product, but we love the small touches Dewalt has added to their coolers. That being said, we’re giving the accessories point to Dewalt.

Yeti coolers come with an impressive 5-year warranty. Yeti is easily sure of this build quality and they’re not afraid to advertise that their products are built to last.

Dewalt, in comparison, comes with a 3-year warranty. It’s still a great protection period for a cooler but since it’s less than Yeti, the warranty point goes to Yeti.

Because of how important the price aspect is, we’ll reward two points to the winner of this section!

Yeti coolers are known to be the best in the market. If we compare them to any other product, they are mostly going to prevail.

However, the real question is: is the price difference worth the difference in quality? Or are there other products in the market that could give you more bang for your buck while still giving a similar performance?

This is when we give the upper hand to Dewalt coolers. They’re miles cheaper than Yeti coolers. However, the durability, ice retention, and functionality of Dewalt make it compete fairly well with the Yeti.

Are Yeti coolers worth the money?

The short answer is yes. While it’s a matter of perspective, Yeti coolers are still the leaders when it comes to cooler quality. The confusion usually occurs when a product of similar performance (like Dewalt) is compared to Yeti at a cheaper price.

Are Dewalt coolers better than Yeti?

We can’t go on a stretch and say that Dewalt is better than Yeti. They’re just a lot more cost-efficient.

Can I put dry ice in Dewalt and Yeti coolers?

Yes, you can. Both containers won’t explode if you put dry ice in them. The containers are not 100% air-tight. The air will find a way to slowly escape and prevent explosions.

The Verdict: Which Cooler Should You Buy?

In our Dewalt Cooler vs Yeti battle, Dewalt managed to rack up 4 points against Yeti’s 3 points.

At the end of the line, if you don’t have a problem with paying to get the best of the best, Yeti is the go-to brand.

If you prefer to pay less and get more, Dewalt should be the obvious choice.