Did you know that a cooler is called a chilly bin in New Zealand or an esky in Australia? Whatever you call it, buying a cooler is a must now, with summer around the corner.

Summertime is synonymous with family picnics and road trips. Plus, we’re sure you’d love to keep your snacks and drinks cold while camping or spending a sunny day at the beach.

If you’re already considering Bison and Yeti coolers but are still unsure about which to get, this article is for you.

We’ll provide you with an overview of Bison cooler vs. Yeti to help you decide which is best for you. So, read on!

When comparing Bison and Yeti coolers, both are made of durable rotomolded plastic. Bison is heavy-duty, while Yeti is bear-proof, and customers who’ve owned Yeti for years say it still looks new. Both are available in different sizes and colors. Yeti has better ice retention and higher value for money, whereas Bison is heavier, more affordable, and more often recommended by customers.

So, what’s the difference between Bison coolers, the 100% American-made brand, and Yeti, which some consider the cooler market leader? Let’s learn more about both!

Both Bison and Yeti coolers offer you different models, whether hard-sided or soft-sided. You can order customized coolers from both, however, Bison offers very cool lid graphics. 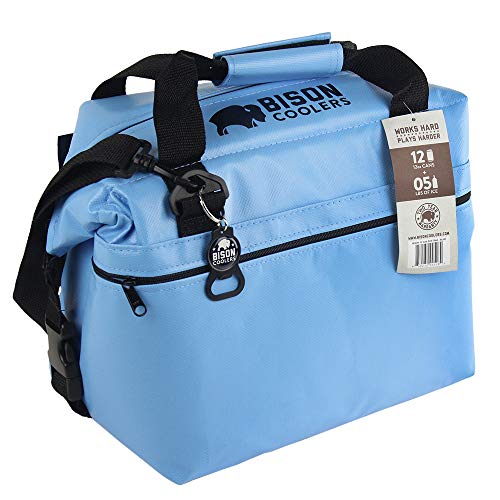 First of all, Bison coolers are available in dozens of models in different sizes, such as 20, 50, 75, and 125 quarts. They have a classic boxy design with six standard colors: white, gray, olive, tan, blue, and red.

The colored coolers have white lids to reflect the heat of the sun and stay cold for longer.

Their unique flat shape makes it easy for you to pack a Bison cooler in your car trunk next to other bags or boxes.

Moreover, you can get the Bison hauler, which is an optional wheel kit to overcome the heavyweight issue if your cooler is full.

For easy draining, sizes from 50 qt and more have dual drain plugs. Better still, you don’t need to entirely unscrew the plug to drain the extra water. So, you’ll never lose the plug.

Lastly, according to customer reviews, the coolers’ four rubber feet make them very stable in the car trunk and on any surface. 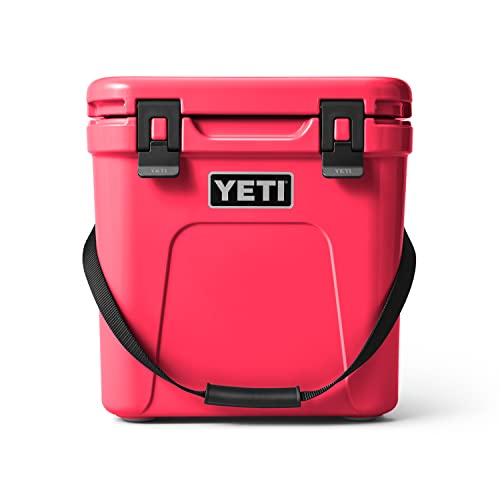 As for Yeti, there are around 25 different shapes and sizes as well as ten colors, including navy, white, tan, and yellow. In addition, Yeti regularly releases limited edition coolers with attractive colors.

Even better, you can custom-design your Yeti cooler.

Yeti has also released a stainless steel cooler, but it may cost you a fortune.

Unfortunately, only the 65 qt Yeti coolers are available with wheels for an extra cost. However, this makes the 65 qt coolers ideal for camping, so the price may be worth it.

Finally, and based on reviews, customers don’t like how the drainage spout isn’t attached to the cooler because it can easily be lost.

Both Bison and Yeti coolers are made of the popular rotomolded plastic, which means both coolers are durable.

Made in the United States, Bison coolers are famous for their high-quality materials and build. For example, their insulation is two inches thick, which makes them heavy-duty coolers.

Besides, the insulated walls are pressure-injected for extra firmness, and the rubber latches are sturdy.

According to customers’ reviews, the quality of Bison coolers exceeded their expectations. 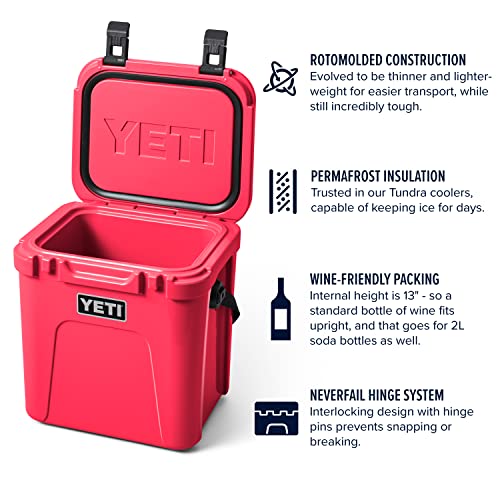 When it comes to quality, Yeti coolers are bear-proof because they’re locked with two padlocks so that grizzly bears can’t rip off the rubber latches. So, if you’re a regular camper, Yeti could be a good choice for you.

Based on reviews, customers see Yeti coolers as non-defective, and their plastic has a more premium feel than other coolers.

Bison coolers, 50 and 75 qt, can retain ice for up to seven days if you add ice packs and prechill the contents.

A Yeti cooler would typically hold ice for:

However, you need to pre-chill the cooler and contents beforehand. In addition, Yeti provides you with awesome tips to keep your cooler cold for longer.

Below, we’ll be comparing the Yeti 45 qt and Bison 50 qt coolers. We’ve chosen these sizes to compare because they’re ideal for camping, fishing, and going on picnics.

The Bison 50 qt cooler’s weight is 34 lbs (15.4 kg) when empty. Based on common customer reviews, some think it’s too heavy to carry.

On the other hand, others find the Bison cooler easy to carry using the grab rails or the rope handles. They also believe the tube grip is durable.

The 45 qt Yeti cooler weighs 23 lbs (10.4 kg) when empty. Based on reviews, a few customers commented that it’s a little heavy, but it’s manageable. It’s 11 lbs lighter than a Bison cooler, though.

Price and Value for Money

Even though both give you good value for money, Yeti coolers are more pricey.

So, if you’d like to get a good value for money, getting a Bison cooler might be your best choice.

Most reviewers find the Yeti coolers on the expensive side, whereas others believe its value as a status symbol makes it worth the money.

Therefore, the Yeti cooler is the more expensive option, but it can be a great investment in the long run.

To sum up our Bison cooler vs. Yeti guide, both offer you durability, a variety of sizes and colors, and customizations. However, you need to know that Bison coolers are heavier than the Yeti ones.

If you’re keen on getting better ice retention, Yeti may be a good category of coolers to choose from. Just make sure you pre-chill the cooler and contents before use.

Finally, if you’re on a limited budget or interested in having a stylish lid design while still getting a high-quality cooler, Bison coolers may be a better fit.