Imagine if Tom Hanks had a Yeti cooler in Cast Away. Things would’ve gone differently, huh?

Granted, he’d have still been stranded on an island for four years, but at least he’d have some cold beverages to keep his company.

The Yeti Tundra series offers some excellent options for outdoor trips. The coolers’ ice retention is unrivaled, and their insulation capabilities are to speak of.

You have some key aspects to consider if you’re weighing your options and comparing the Yeti 65 and 75. Here’s a brief overview and a complete comparison between the two.

The Yeti 75 offers ample room for 57 cans in the standard size, while the Yeti 65 can only carry 42 cans. The former is better for long trips and large families, but the latter is lighter and easier to handle.

After reading the overview, you now know which Yeti is better for what purpose. However, if you want to get into the details, here’s a complete comparison.

Both the Yeti 75 and 65 have a cold lock gasket lining their lids, which blocks the heat outside and keeps the cold inside. As a result, the insulation capabilities of both the Yetis are hard to match.

Moreover, both coolers have LipGrip handles, which offer a comfortable grip for lifting the coolers. You can find them directly under the lids, and they’re helpful for long walks.

On top of that, the 75 and 65 have slip-resistant feet, so they don’t slide when you put them on any surface. You can place your Yeti on a hill’s edge for the sake of it, and it probably won’t slip.

If you want to mount the coolers on your truck, kayak, or any vehicle, both of them have tie-down slots for that purpose. 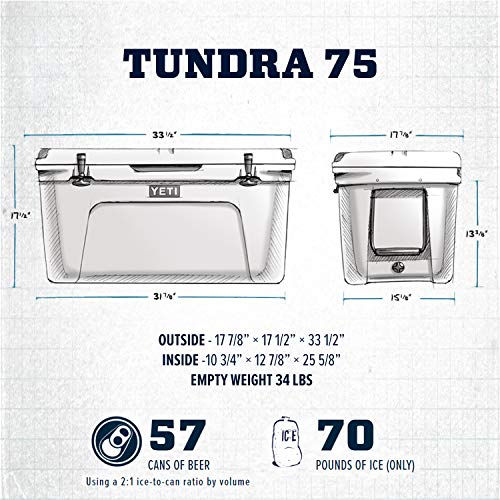 The capacity may be the only significant difference between the Yeti 65 and 75, aside from the size and price. The Yeti 65 has a 42-can capacity, in reference to standard market cans. Additionally, it can carry up to 52 pounds of ice.

If you’re going on a long trip with your whole family, the Yeti 75 will be the more convenient option because of its extensive capacity. It’ll be more than enough for three days or more, and its ice retention is also impressive.

However, you need to make sure you can handle its size and weight. If your car trunk doesn’t have enough space, you may as well resort to the Yeti 65. 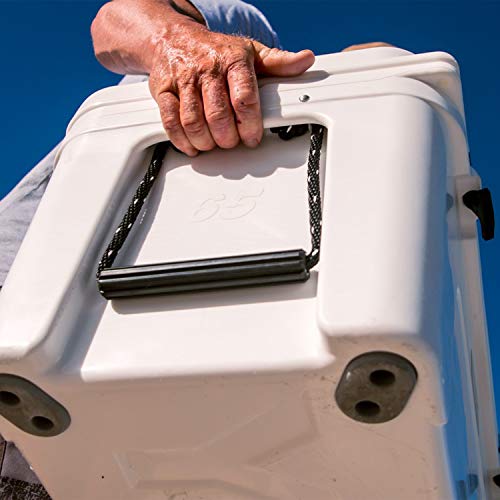 Portability is crucial to consider when buying coolers. If the cooler you’re buying is too heavy for you to lift, then what difference does it make from your refrigerator at home?

You need the cooler to be lightweight enough for you to lift it. If you tend to walk for long distances, you’ll have to consider your lifting capabilities as well.

The Yeti 75 weighs 34 pounds when empty, making it the less portable option between the two. Meanwhile, the 65 weighs around 29 pounds, which is still heavy but better than the former.

When the 75 is filled with cans or water bottles, it’ll be significantly heavier, so you need to consider the weight closely before buying.

That said, the weight difference between the two models is insignificant. So, if your goal is to have a bigger capacity, the 75 is obviously the better option.

Both coolers have rugged frames, topped off by 2-inch thick Fallwalls with Permafrost insulation. In addition to that, they feature rotomolded construction without any hinges or joints. The hinges are almost always the first parts of a cooler to go loose. With the Yeti Tundra, you won’t have that problem.

All Yeti Tundra coolers come with the same ice retention capabilities. Some people are convinced larger Yetis can retain the cold for longer, but that’s a common myth among hopeful buyers.

You can improve the ice retention of your cooler by keeping it closed for longer without opening the lid frequently. Plus, you can adjust the packaged items inside for optimacy. But you’ll get the same results from both the Yeti 75 and 65.

Generally, the Yeti Tundra coolers can retain ice for three or four days, depending on how you treat them. 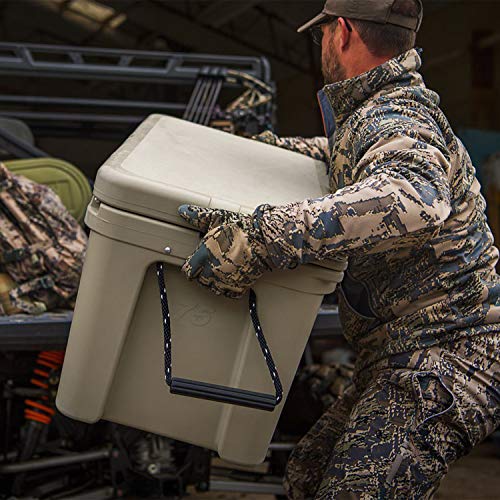 Both the Yeti Tundras can be used in extreme weather conditions and all kinds of outdoor trips. You can take them to fishing sites, campsites, and even construction sites. They’re highly durable and hard to scratch, so you don’t have to worry about damaging them.

The Yeti 75 is more suitable for trips that don’t require a lot of moving around. It’s a heavy cooler, and you don’t want to suffer arm ache for the rest of your trip because of it. If you tend to take long walks with the cooler, the 65 may be the more convenient option.

The Yeti 75 is larger than most coolers in the same price range, so it’s an excellent option for long trips. The Yeti 65 is also large, but its capacity is significantly smaller. If you have enough room for the 75, it’ll be the better option, especially if you’re going with a lot of family members.