Since the company’s launching in 2006, the Tundra series has remained Yeti’s most sought-after product line. Between affordable and high-end coolers, the series offers all the features you can think of. Cool, isn’t it?

Today, I’ll compare the Yeti 65 and the Yeti 45. Both have rotomolded constructions, both retain ice for three days, and both are perfect companions for all kinds of trips. Choosing the best out of them is no walk in the park, but it should be easy if you have your priorities lined. Here’s a full comparison between the two Yetis.

The Yeti 65 is better for large families and long trips. Meanwhile, the Yeti 45 is more convenient for short trips. Both have the same features and ice retention, but the Yeti 45 is smaller and lighter. If you don’t have enough space, the Yeti 65 will be out of the question.

After reading the brief overview of the two Yetis, see this face-to-face comparison for all the nitty-gritty.

With portable coolers, the capacity is a bit tricky to consider. You want all the space you can get for your beverages and food. But at the same time, you want the cooler to fit in your trunk easily.

On the other hand, the Yeti 65 is significantly larger. It fits 42 standard cans with the same ratio as the 45. As for the ice storing capacity, it can carry a hefty weight of 52 pounds. Needless to say, it’s the more suitable option for large families. 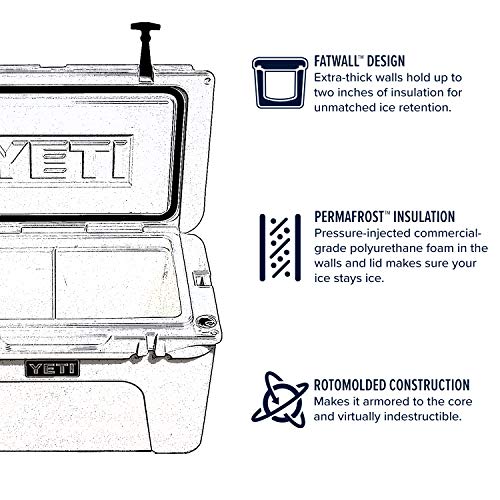 Yeti has standard construction principles throughout the whole Tendra series. So whether you go for the 65, 45, or even the Yeti 50, you’ll find the same molded frame.

You may think I’m exaggerating, but the way these Yetis are constructed, you’ll need a brute force to see even the tiniest scratch on them. The rotomolded construction is resistant to all outdoor conditions. You can throw the Yeti down a hill if you’re in the mood for an adventure, and it’ll come out unscathed.

The Yetis’ frames are made into one piece without using any joints. Of course, this improves the durability by a long shot. In addition, you won’t have to suffer the hassle of loose or unlatched hinges.

Generally, both the Yeti 65 and 45 are equally durable because they have the same construction.

It doesn’t take a genius to figure out that ice retention is the sole more critical feature in coolers. You can get the most durable ice cooler out there, but if it doesn’t have solid ice retention, it might as well serve as a nice bedside table.

The cooler’s ice retention depends on its inner insulative compartment. Both the Yeti 65 and 45 can retain ice for up to three days, considering the surrounding conditions are optimal. Most coolers in the same price range only offer 24-hour retention, so the Yetis have leverage here.

It’s worth noting, though, that the Yeti 65 may be able to retain ice for up to six days if you keep the ice inside. The Yeti 45 doesn’t offer the same advantage.

The Yetis have impeccable ice retention simply because of the way they’re made. Their interlock lid system prevents the coolness from escaping, and the cold lock gasket that lines the lid’s border blocks out all the heat.

Both the Yeti 65 and 45 are portable, but they aren’t equally easy to handle. Heavy coolers have proven to be a hassle to deal with, but you have to live with the weight if you need a large cooler.

The Yeti 45 has a 23-pound frame, which is quite decent for its size. You can carry it for long walking distances without feeling fatigued. I can’t say the same about the Yeti 65, though, with its hefty 29-pound body.

The 6-pound difference may be insignificant for some users—basically the ones that hit the gym regularly—, but it may be a problem for others. If you aren’t able to handle or store the 29-pound Yeti 65, you might as well buy the 45 instead. 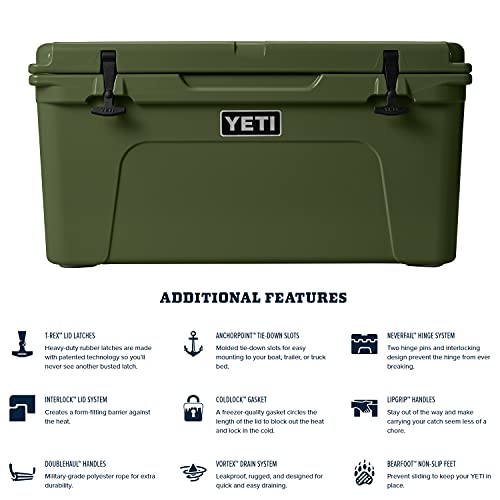 The main difference between the Yeti 65 and 45 lies in their size, price, and capacity. Other than that, they share the same ice retention and features.

Both Yetis have a thick Fallwall design for improved ice retention. The Permafrost insulation makes sure your beverages inside stay cold for up to three days.

On top of that, there’s the Vortex drain system, which allows you to drain the Yeti’s components easily and without a mess after you’re done using it.

Lastly, both coolers feature a non-slip grip below, so you can put them on any surface without fearing they’d slip or fall. They have impressive traction.

When you compare the prices of the Yeti 65 and 45, you’ll find that the 65 is more cost-efficient. Considering it’s slightly more expensive than the 45, and its capacity is larger by 14 cans, it offers better value for money.

The Yeti 45 is obviously the cheaper option, but that’s if you’re okay with its limited storage. The Yeti 65 is the better option for long trips, and the price difference is insignificant.

The Yeti 65 and 45 are both similar in nearly everything. However, their capacities are different, and consequently, this means their prices are different as well. The price difference is insignificant when you weigh the differences.

The Yeti 65 is the perfect companion for long trips, but it needs ample room for storage. The 45 is more compact, but it has a smaller capacity. It’s up to you which you’d rather deal with.