Both Grizzly and RTIC are renowned leaders in the coolers industry. They offer nearly the same products, but there are some varying features and prices. To decide which is better, you need to try both for outdoor trips and judge for yourself.

Luckily for you, I’ll save you the hassle and give you the final verdict. First, I’ll tell you all the differences between the two, including their strengths and weaknesses. Then, you can decide for yourself which is better for your usage.

If you want to pay an affordable price and don’t mind a couple of design flaws, RTIC coolers will be the better option for you. Grizzly coolers are more durable, and they have exceptional ice retention of seven days, but they cost more.

Grizzly vs RTIC – The Full Comparison

Now, you know which company makes the best coolers for which purpose. However, that’s not always enough to make a decision. You may want to see the nitty-gritty here, so you pay your money while assured you’re making the right choice.

RTIC have always prided themselves in the fact that they make coolers with the same quality as Yeti, but for a lower price. Unfortunately, they went too far that Yeti filed a lawsuit for patent infringement, but that’s a story for another day.

What I’m trying to say is, RTIC offers some of the most affordable coolers on the market. So, when you compare it to Grizzly or any other company, it has leverage because it doesn’t sacrifice quality.

For example, RTIC makes the same rotomolded construction as Yeti, which is highly durable and insulative. If you compare the prices of both companies, RTIC will be the budget-friendly option.

So, without beating around the bush, if you want a cooler that looks precisely like the Yeti without a logo and with nearly half the price, RTIC is an excellent option.

Grizzly offers more expensive options than RTIC, but it’s still cheaper than Yeti. So if you compare the market position of Grizzly and RTIC, both are more affordable than Yeti, and RTIC is the cheapest out of them.

The catch here is that Grizzly makes its coolers in the USA, while RTIC manufacturers in China, which explains the drastic price difference.

Both Grizzly and RTIC make their coolers with rotomolded construction. Again, it’s the same as Yeti, so they’re both strong competitors, although Yeti offers high-end options.

RTIC offers a 30-day return window for its coolers, but they have to be in the original condition without signs that they’ve been used. On top of that, the company provides a warranty against material and workmanship defects.

The manufacturers claim their coolers to be water-resistant for three feet underwater. But the warranty doesn’t cover the contents or the foam.

I believe RTIC’s warranty system is a bit confusing because there are no clear guidelines. For example, you may apply for a warranty return or exchange if your cooler has defects, but the company may not accept it if they decide the warranty doesn’t cover the defective part.

That wouldn’t be an issue if you know what parts are covered and when returns are accepted, but that’s not the case here.

Grizzly provides a limited lifetime warranty for all of its coolers. The warranty covers manufacturer defects, including the gasket and seal issues.

All that said, the Grizzly warranty won’t cover your cooler if you use it commercially, damage it in a car accident, or damage it because of misuse. It also won’t work if the cooler gets damaged because of an act of nature. Or, if it’s repaired or changed from its initial configuration. 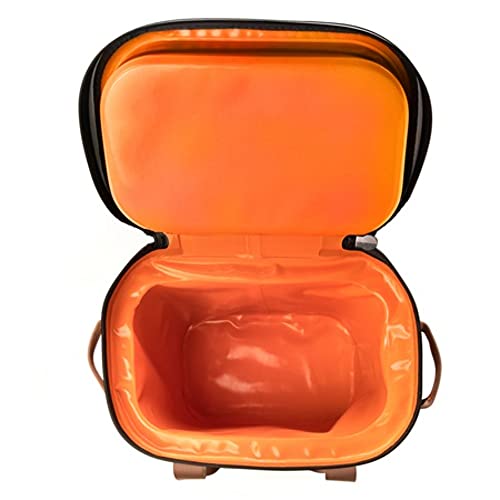 RTIC coolers have rotomolded frames that are equally as durable as Grizzly’s. However, they feature some low-grade rubber components. Granted, the latches are easier to snap into place because of the rubber. But at the same time, the rubber wears out faster than other materials, affecting the whole sealing system of the lid.

If you don’t care much about these small details, you can always replace the rubber parts when they wear out.

Moreover, RTIC coolers have gaskets that aren’t sealed. There’s a small gap between the two ends, which may cause the cold to escape. Again, if you don’t mind the minor inconvenience, you can seal the gap yourself with epoxy after you buy the cooler.

In the end, RTIC coolers are incredibly affordable, so it’s only normal that you’ll have to sacrifice some features. 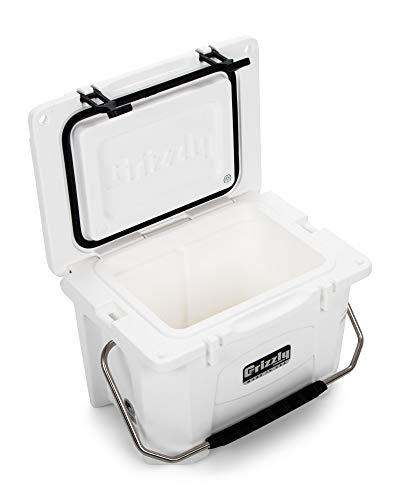 There’s a minor downside to the construction of Grizzly coolers, though: the screws.

All Grizzly coolers have latch hardware with screws, but their quality isn’t the best out there. Therefore, they compromise the quality of the whole latching system.

Some coolers have riveted pins going around their whole frame, so there’s no risk of hinges going loose. But that’s not the case with Grizzly.

If you treat your cooler well and keep it maintained, you shouldn’t have a problem, but it’s worth knowing what the users complain about.

When it comes to insulation, Grizzly offers the same quality as high-end brands, such as Yeti. Grizzly coolers have foam insulation pressure-injected into their rotomolded frames, resulting in exceptionally high ice retention.

In addition to that, there’s a thick rubber gasket that keeps the cold inside. And, the lid is heavily insulated to make sure no heat gets in.

Generally, Grizzly has nearly the best ice retention on the market. Some of its coolers can last for seven days, which is a lot more than competitors can offer.

RTIC coolers retain the ice for three or four days, which is the same as most brands on the market. In ideal conditions, you can have your RTIC cooler retain ice for around five days. But that’s only if you keep it closed without reopening it frequently.

All in all, RTIC coolers offer decent ice retention for their price, but Grizzly is the obvious winner.

If you don’t mind the price of Grizzly coolers, they’re the better option if you want solid ice retention. They offer up to seven days of insulation, which is unmatched. Meanwhile, RTIC coolers are the affordable version of Yeti coolers. They’re budget-friendly, but they’re not as durable as the market’s expensive options.