Whenever someone mentions fishing or hunting coolers, Yeti is the first name that comes to mind. Yeti was able to provide its consumers with top-notch coolers with a wide range of sizes, many great features, and impressive durability.

Still, Fatboy is another cooler brand that a lot of people swear by, which makes you wonder who would win in a Fatboy cooler vs. Yeti comparison. In this article, we’ll dive deeper into the features of both brands so that you get to pick your favorite.

It’s hard to compete against Yeti when coolers are the judging point. With an amazingly high build quality and long-lasting ice retention, Yeti will easily take first place. That’s why Fatboy had to think of something new that Yeti didn’t provide. That includes metal baskets, bottle openers, holders, detachable nylon handles, and a specially designed drain plug.

Let’s look at a side-by-side comparison between Fatboy and Yeti to see the similarities and differences between both brands. That should make your decision-making process easier.

Let’s start things off with common ground between both coolers:

Ice retention is the first and most important aspect a cooler should have. Yeti will kick things off with an average of 100 hours of ice retention for their 60-quart cooler.

Fatboy, on the other hand, claims to have an average of 200 hours of ice retention for their 75-quart cooler.

When it comes to build quality and durability, Fatboy and Yeti are both very sturdy. The great thing about both brands is that they’re both rotomolded

Rotomolding, also known as rotational molding, is the process of forming plastic in molds. It uses high temperature and mold rotation to reach a mold shape as a one-piece body.

This process ensures the manufacturing of a rigid and durable plastic cooler.

For Yeti, there’s no doubt they have mastered the rotomolding method in building their coolers, otherwise, how would their coolers be certified bear-proof?

Fatboy implemented the same method in building their coolers, which means their coolers are incredibly strong, but still not bear-proof.

Both Yeti and Fatboy offer T-Rex latches. These are industrial-grade latches that make opening and closing the cooler lid easy and yet secure the lid for a tight seal.

Yeti offers T-Rex latches for almost all its hard coolers, except for the Yeti V Series. Fatboy also features the same latches for all models excluding the 10-QT.

Cooler mobility is an extremely important feature since you’ll be loading it with cans or food, which can make carrying a cooler a pain in the back. This is why Yeti has added wheels to its Tundra Haul model to make moving it an easier task.

Fatboy also used the same concept in its 70-QT Wheeled cooler, which levels up the cooler game for Fatboy. 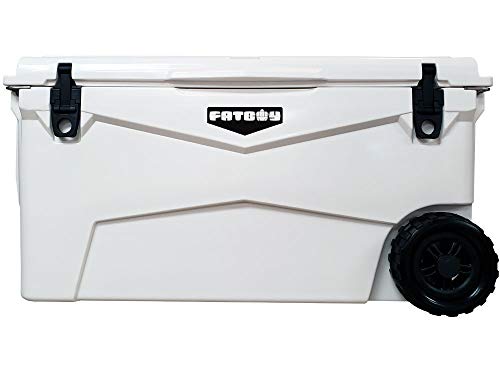 Yeti uses military-grade polyester with a rubber grip that makes its products a breeze to carry. So, if you’re suffering from sweaty hands, Yeti has got you covered. The only thing Yeti is missing is a detachable system.

On the other hand, Fatboy did a great job with their cooler handles. They’re made out of polyethylene and nylon, and the best part about them is that they’re detachable.

For Yeti, the cooler’s bottom feet are called “BEARFOOT™”. It’s an anti-slip system that helps keep your cooler right where you left it.

Fatboy included an anti-slip system in their coolers called Non-Skid Bottom Feet. Whether you place the cooler in a boat or at the back of your truck, it’ll stay there no matter how bumpy the ride is.

Yeti coolers come with an impressive five-year warranty. Yeti is easily sure of their build quality and they’re not afraid to advertise that their products are made to last.

Fatboy cooler shells are warranted against material defects for five years. Any non-rotomolded components such as handles, drain components, and latches are only warranted for a 90-day period.

Here are two related comparisons: Yeti vs Bison and Dewalt vs Yeti

Let’s look at the differences that make each brand stand out in its unique way. 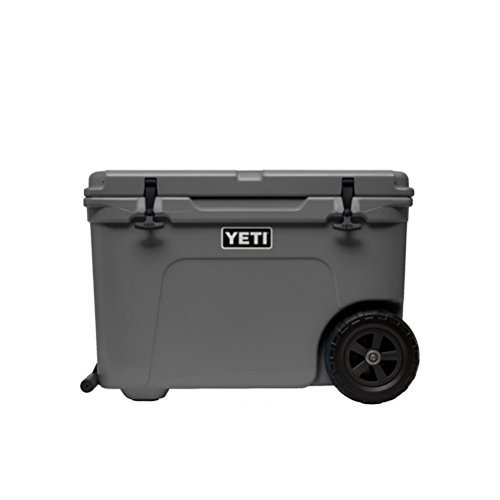 Of course, Yeti has drain plugs in almost all their coolers, excluding the 24-QT Roadie. So, you can drain your Yeti cooler without lifting a finger. Better still, the drain plug hose connection fits most standard hoses.

For Fatboy, the brand took the extra mile with its drainage system. It equipped the coolers with a vacuum button, which should speed up the draining process. All you’ll have to do is press the button to allow air into the cooler, and then the water will burst out of the drain plug.

While accessories can be hard to diversify when it comes to products like coolers, Fatboy was able to overcome Yeti in this aspect.

For instance, Fatboy coolers have dividers that work as a cutting board and drain plugs that attach to the cooler’s side with a metal chain.

Fatboy made great use of the cooler’s front corners by turning them into stainless steel bottle openers. If you’re still not impressed, those same corners work as a lock for your cooler; this feature is called “Dual Locking Corners.”

All you have to do is place a lock in one of the corners, throw the key in your pocket, and your cooler will remain secure.

Yeti only implemented the lockable corners but, unfortunately, it didn’t include the bottle openers in its coolers’ corners.

After reading our Fatboy cooler vs. Yeti comparison, you now know the upsides and downsides of each brand.

Yeti has been in the cooler business for years, and the brand knows how to put top-quality coolers into its menu. So, if you’re looking for a well-known and commonly used cooler, with a sturdy build and long-lasting ice retention, Yeti is your go-to.

However, Fatboy offers great quality coolers with lots of thoughtful accessories, from vacuum buttons to lockable corners and bottle holders. If you’re into having practical accessories in your cooler, Fatboy should gladly fulfill your requirements.