If you’re into the boating scene but don’t want the boat, you probably thought of sticking with an inflatable one. Yet, with an overwhelming number of inflatable boats in the market, you might be uncertain which one to choose. But, have you considered Intex Excursion?

The 50-year-old company has drawn countless customers from all over the world with its high-quality products and reasonable prices.

Ready to dive in?

To choose the best one, you’ll need to look at the boat’s specs, such as how many people it can fit, what it comes with, as well as the safety precautions. Without further ado, here are some of the comparisons reviewed in more detail.

Both boat models have the same height of 17 in. The Intex Excursion 4’s width and depth are 124 and 57 in, respectively. The inflatable boat weighs around 51 lbs. This might explain why buyers are so fond of its compactness.

The Intex Excursion 5 comes at an expectedly larger size. Its width and depth are 144 and 66 in, respectively. It weighs only 57.4 Ibs. While it’s considerably bigger than the earlier model, boating fans favor the Intex Excursion 5 due to its strength and durability.

Both the Intex Excursion 4 and 5 are reliable, according to their users. The inflatable boat’s lifespan can extend up to 10 years with proper maintenance.

That being so, both models of the Intex Excursion have similar specifications in their build and material.

They’re made from three-layered PVC vinyl. The inflatable boat series is puncture-resistant and the floors are made of heavy-duty extracted plastic.

Despite the durability of both boats, some users pointed out some minor flaws here and there. For example, a few people reported that they’d found holes in some areas of the boats.

Related:
– Intex Challenger & Seahawk Head-to-Head Comparison
– What are The Differences Between Mariner 3 and 4?

If we’re talking weight capacity, the Intex Excursion 4 may hold up to a solid 880 lbs. If you’re looking to carry some extra equipment, the inflatable boat might give you enough support.

The Intex Excursion 5 can handle approximately 1320 lbs. A heftier weight capacity can give you more room for your friends or fishing equipment.

That being so, you might be able to count on both boat models to carry more weight for your food, fishing gadgets, and other supplies, aside from the people’s capacity. 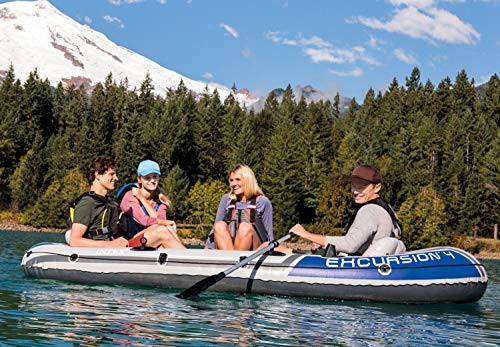 The Intex Excursion 4 model supports less weight, so it can only fit four adults, compared to the other model’s five-person capacity. The seating layout includes two 2-person seats on opposite sides, facing each other.

Planning to go on a long fishing trip? The seat’s decent lumbar support might give you the extra needed comfort.

People who used this boat were impressed with its capacity to properly fit four people. But, others noted that it can only accommodate three adults and one child.

Like the Intex Excursion 4, the later model also has two inflatable seats on each end of the boat. The fifth person can sit on the inflated middle seat.

Although it’s roomier, most buyers choose to use that space for their equipment. Some even choose to remove the seats altogether for extra space. 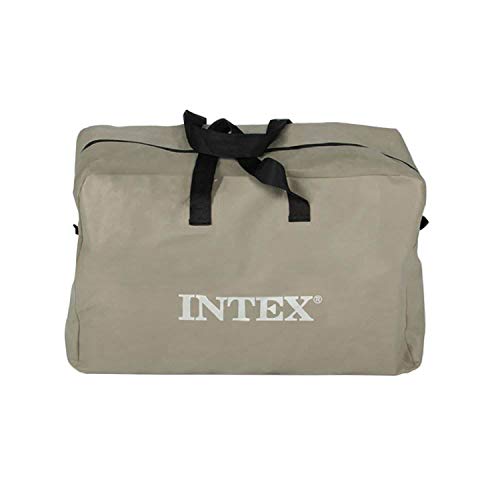 The extras are what give these inflatable boats their added convenience. Whether you’re looking to sport some fish or simply kayak around the lake, the accessories provided by both models might prove helpful.

Besides that, the Intex Excursion series is stocked with a handy gear pouch where you can keep your personal belongings. They’re also supplied with two 54-in aluminum oars. The oars can be placed in their oar locks and oar holders (two on each side).

The inflatable boats also have a grab line and a grab handle on each side for you to move around freely. You can also find a motor mount fitting in both models with a maximum of 1.5 horsepower.

Both boats are outfitted with three air chambers, as well as Boston valves that’ll ease the inflation and deflation process for you.

This is most likely because of the size and seat capacity difference. Nonetheless, both prices are budget-friendly and shouldn’t have you break the bank.

Now that you have all the facts, which inflatable boat model is better for your needs?

All in all, we recommend opting for the Inter Excursion 5 if you want to get more people or fit more equipment with you.

In this Excursion 4 vs. 5 comparison, the winner mainly depends on your preferences. Either way, we hope you have an enjoyable boating experience with your loved ones.